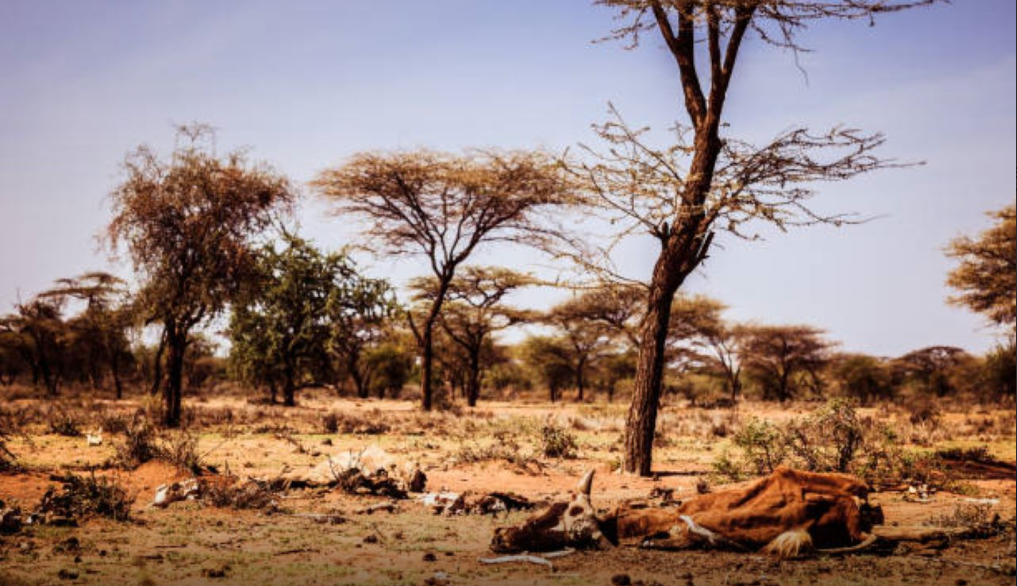 Climate change and failed crop production are ravaging parts of East Africa with Kenya being one of the most adversely affected countries. Cattle, sheep and goats are dying in thousands as water sources dry up; making parts of the country’s landscape desolate and inhabitable.

In some of the remotest parts of the country such as Turkana County, famished families forage for berries for survival as malnutrition makes them ever more vulnerable to deadly ailments such as Malaria. Villagers in the north-western part of the country have to dig 10-foot-deep holes in search of water, as water tables sink.

The Greater Horn of Africa has been suffering the longest drought in 40 years, with parts of the region bracing for a fifth consecutive failed rainy season following a forecast by the World Meteorological Organization (WMO). Extreme weather has
made parts of the region inhospitable, with the landscape dotted with carcases of dead
livestock.

In Kenya, the National Drought Management Authority estimates that up to 1.5 million livestock, mainly cattle and sheep, have died since October last year as the drought continues to devastate the region. Guleid Artan, Director of the Intergovernmental Authority on Development (IGAD) Climate Prediction and Applications Centre (ICPAC), warned that Ethiopia, Kenya and Somalia are on the brink of an “unprecedented humanitarian catastrophe.”

IGAD and humanitarian agencies recently raised the alarm that over 50 million people in the region are suffering from acute food insecurity this year. A new analysis by the World Health Organization (WHO) has established that the number of reported disease outbreaks and climate-related health emergencies in the greater Horn Africa has reached their highest-ever level this century, deepening a health crisis in a region where 47 million people are already facing acute hunger.

In neighbouring Tanzania, which was deemed to be better placed, more than 6 million dwellers of the country’s commercial capital, Dar es Salaam, are now faced with water shortage after the Dar es Salaam Water and Sanitation Authority (NAWASA) imposed water rationing. The Authority cited dwindling water levels in Tanzania as the country continues to experience prolonged dry weather. Water supply from Ruvu River, the city’s main
a source has dipped from 466 million litres a day to about 300 million litres daily.

This is against a daily consumption of 500 million litres.“Climate change is having an impact, here and now, on the health of Africans in the
greater Horn of Africa. The failure of four consecutive rainy seasons has scorched the earth and pushed people out of their homes in search of food and water,” Dr Matshidiso Moeti, WHO Regional Director for Africa said in a statement.

To mitigate the raging drought, the Kenya Government last month announced a plan to construct 100 mega dams, as the country seeks to cut back reliance on rainfed agriculture and pivot towards irrigation. Kenya’s President William Ruto said the dams will be used to conserve water for the dry seasons. “We currently have a bad drought and it will only get worse due to climate change. Unless we change the environment, climate change is a reality that we must live with,” he said.

Millions of children under the age of five years are estimated to be facing acute malnutrition, increasing their risk of not only starvation. In the past four years, the number of people facing acute hunger in the greater Horn of Africa has more than
doubled.

“It is critical that world leaders reach an agreement on stemming the rise in temperatures at the 27th  United Nations Climate Change Conference (COP27) which is very appropriately taking place in Africa. As a continent we are the least responsible for global warming, but among the first to experience its tragic impact,” adds Dr Moeti.

Drought is not the only extreme weather event the region is fighting. South Sudan is experiencing its fourth consecutive year of flooding, with 40 per cent of the country under water. Heavy rains and flash floods continue to affect tens of thousands of people across neighbouring Sudan. The floods have destroyed or damaged thousands of houses and tens of health facilities, water sources, and latrines in 15 states. Additionally, livestock and a wide
area of agricultural land has been affected by floods, which contribute to food insecurity.

Food insecurity, resulting from flooding and drought, along with conflict, the fallout from the COVID-19 pandemic, and high food and fuel prices, has forced people to flee their homes and the region now has 4.5 million refugees and asylum seekers as well as 12.7 million internally displaced people.

Elsewhere in southern Ethiopia and Somalia, over a million people have been displaced as existing water scarcity continues to be exacerbated by furnace-like high air temperatures. In farmlands, harvests have been below average, causing a protracted reliance on markets, where households will have limited food access due to high food prices.

For the larger East Africa, the October to December rainy season makes up 70 per cent of the annual total rainfall in the equatorial parts of the Greater Horn of Africa, particularly in eastern Kenya. As the riverbeds dry up and grasslands shrivel up, the drought has coincided with a rising global rise in food and fuel prices, driven up by the war in Ukraine, fanning a catastrophic storm in East Africa.