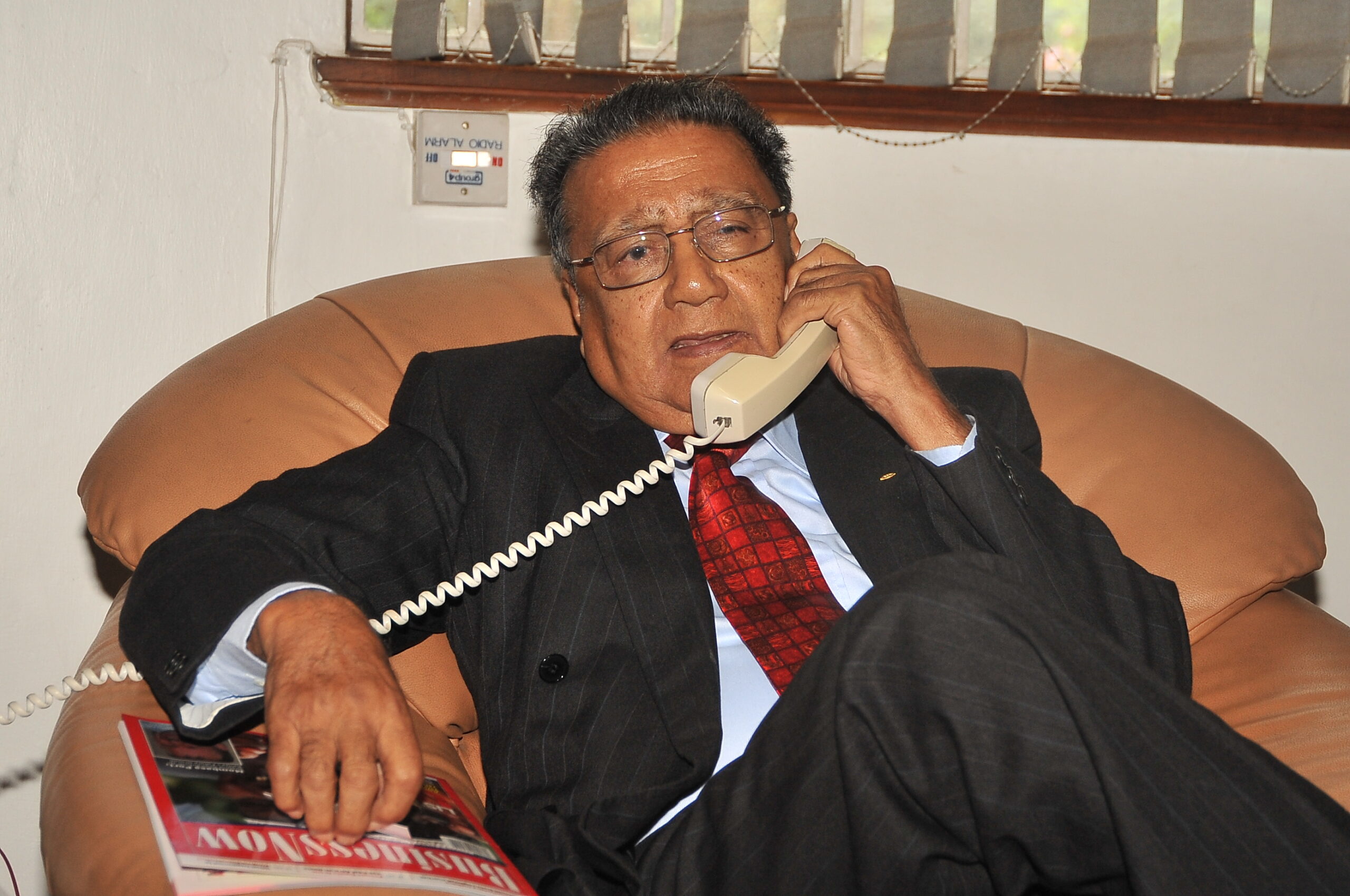 “The wealth that you have is not yours. You are only the trustee of the wealth you have,”  Dr. Manilal Premchand Chandaria

I have come to terms with my own mortality and what better way to deal with that than to bequeath to the living?” wittingly asks Dr. Manu Chandaria, veritably the bellwether in the altruistic area of philanthropism within Africa’s fastest-growing region. And understandably, because of his ubiquitous charitable engagements drawing in the existential sectors of health, education, and social services, this nonagenarian typically attracts circumspect admirers as he transcendently redefines charitableness, with no questions asked.

This past August, for example, Dr. Chandaria fittingly became the first African awardee of the Carnegie Medal of Philanthropy. According to Eric D. Isaacs,  president of the Carnegie Institution, it was Dr. Chandaria’s work to give “hope for a healthier and better-educated population” that caught the attention of the award’s selection committee,

“Mr. Chandaria is setting a very high standard for philanthropy through his support for higher education and his efforts to mobilize and empower a new generation of business leaders,” Isaacs wrote in a statement to Devex. “We believe that his example will inspire other philanthropists, perpetuating the virtuous cycle that the Carnegie family of institutions seeks to advance.”

On receiving the global award, this professional Engineer who is an alumnus of the University of Oklahoma, graduating in 1951,  underscored that philanthropy was more than just giving money to people in need, noting that people can still be philanthropic by contributing to society in any way they can.

“Philanthropy is not just about writing a cheque and giving it away. It is about serving the community. Whether it is by giving money, by working for the community or by looking after them, whatever way that’s what I call philanthropy,” he said.

With an estimated net wealth of $2.5 billion inextricably tied to the 107 -year-old family-owned Comcraft Group of Companies, of which he is  Chair, this 93-year-old  industrialist is in big measure part of a selfless, moneyed,

global coterie who passed as proteges of John D. Rockefeller who formalized charitable giving back in 1913, setting up the Rockefeller Foundation.

In 2010 he and Bill Gates launched the Giving Pledge Initiative, asking billionaires to commit to donating at least half of their wealth to charitable causes, with Patrice Motsepe becoming the first African to sign up for the initiative.

Locally, the philanthropic spirit is getting traction.

The top office in the land took cue as witnessed in 2003 when former President Mwai Kibaki conferred  Dr. Chandaria with the award of the Elder of the Order of the Burning Spear (EBS) “ in recognition of outstanding or distinguished services rendered to the nation in various capacities and responsibilities.”

And on the global stage, Queen Elizabeth II conferred on him an OBE (Order of the British Empire) “ in recognition of his work for the community in Kenya and promotion of Kenyan economic and British interests in Kenya.”

In 2020 the local Standard newspaper, quoting an anonymous source drawn from the Comcroft Group of Companies, reported Dr. Manu Chandaria had at the time contributed over Ksh 11 billion ( about US$ 100,000,000) to charity.

Verifiably this seasoned rainmaker is not averse to donating money to worthy causes including but not limited to  Ksh 100 million ( US$ 814,464.89 ) handed to Gertrude’s Children’s Hospital, Ksh 125 million ( US$ 1,018,081.11)  to the University of Nairobi, Ksh 25 million to Kenyatta University, and water tanks and hand sanitizers to Kenya’s Police Force during the Covid-19 epidemic. And for the last 67 years, The Chandaria Foundation has supported hundreds of secondary school children especially the girl child through its bursary program.

“Elsewhere, we are the heart valves of the Chandaria School of Business at the United States International University (USIU) in Nairobi and have helped set up the Chandaria Innovation and Incubation Centre at Kenyatta University. We have started a Chandaria Centre for Performing arts at the University of Nairobi.  The Mabati Technical Institute and Mabati Medical Centre at our flagship company, Mabati Rolling Mills Ltd are supported by the Chandaria Foundation.” Dr. Chandaria is quoted by the Standard newspaper.

“Adding,“ We support many secondary schools across the country in one way or the other. Leap Hubs that we are rolling out in conjunction with the Global Peace Foundation will help students start learning and finding out with the help of others what they can do after school whether or not they proceed to universities and polytechnics. Our aim is to help them create a sustainable business.”

And intermittently out of gratitude, beneficiaries of Dr. Chandaria’s selflessness often name institutions eponymously after this local industrialist.

“My wardrobe has five suits. One new comes in, one goes out. I give it out. It’s a lesson about giving. I learned it from Mahatma Gandhi. I followed Gandhi when I was at University. I accepted everything he told us. He led a very simple life,” he told the Standard newspaper.

When he hosted your correspondent in his office along Limuru Road, Nairobi there was nothing displaying a lifestyle coalescing around conspicuous consumption.

Everything around him spoke of simplicity.

But the framed pictures dotting the walls of his office spoke of a man who had dined with the most powerful and influential people in the world. There were framed photos of Mother Theresa and President George W Bush.

“Mother Teresa was a friend of ours. She came to our house four times. She taught us a lot about prayer. Giving is simple when you want to give. It’s easy to give when you feel the pain of others,” Dr. Chandaria told Jeff Koinange.

In an interview with African Philanthropy Forum, (APF) this celebrated philanthropist said, “The wealth that you have is not yours. You are only the trustee of the wealth you have.”

Asked what he would change if he could live his life over, Chandaria responded with characteristic humility and compassion: he would have started serving others sooner, reported the APF.

He explains the genesis of his philanthropic streak is in-grained in the larger Chandaria family.

“ Back in the 1950s, we heard about the Rockefeller and Ford foundations and what they were doing in America. When my brother and I came back from America we thought of starting The Chandaria Foundation. This was in 1954. The idea was to help people without waiting for them to approach the Chandaria family. We thought that with a foundation there would be a focus on our giving. This has proved to be true over the years.”

For a man, whose father studied up to standard three and whose mother was initially illiterate, Dr. Chandaria understandably possesses a soft spot for his parents.

“The family was poor. They only spoke Gujarati, while my mother started reading and writing in vernacular at the age of 55. They strongly felt that the future of their children would not be any better than theirs unless they got educated. To them, this was the only way to get the family out of poverty. To me, education plays an important role in the life of a person’s evolution. It’s because of education that we are what we are today.”

He explains: “Ours is a family business. I came back to Mombasa after my master’s degree in engineering at a USA University in 1955. My brother and two cousins, Keshav, Kanti, and Kapoor with various educational backgrounds also returned to Mombasa. Our family had two businesses, one in Nairobi providing wholesale services to many retail shops throughout Kenya.

The second business was the Kaluworks plant in Mombasa. It was established in 1929 and was the major supplier of aluminum pots and pans in Kenya and Tanganyika till World War Two.

“After considering the fact that our parents gave us the opportunity to go to university for higher education and they had constantly struggled after settling down in Kenya in 1915, we felt we could not disappoint them and ruin their dreams.

We decided to join them to grow the business. Under the guidance of my two elder brothers Devchand and Ratilal, we all put our efforts to grow our small company and within the first five years we had five hundred people working for us.”

In big measure, Jainism has had a seminal effect on Dr. Chandaria.

In an exclusive interview with JoongAng  Group in 2010, Dr. Chandaria described his family’s spiritual heritage as an influence on his philanthropy.

“Jainism has taught me moderation through abstinence and vegetarianism. It guides me to live a life through union and unity within the family,” he reportedly said.

Indeed according to Sean Bevis, a Master’s graduate from the School of Oriental and African Studies (SOAS) at the University of London, who studied Indian Religious and Philosophical Systems, specializing in Jainism and Buddhism, “ “donations” are generally regarded as positive acts of charity within the Jain community,” he writes in an essay titled  “A Philosophical and Sociological analysis of the role of ‘charity’ in Jainism with specific reference to the nature of dana ( giving)  and aparigraha  (non-possession )in both Jain and non-Jain environments.”

In order to renounce parigraha (‘possession’) which he refers to as delusion “which causes a person to develop false notions such as “this is mine” or “I made that” and thinking that one can hold onto what he or she currently “has” forever”  and murccha  ( delusion of possession) an individual has to detach themselves from the ten “external possessions” which are land, houses, silver, gold, livestock, grain, maidservants, manservants, clothing, and miscellaneous goods such as furniture[17].

From the mendicant point of view, all these possessions must be given up entirely, apart from in the ‘white clad’ Śvetāmbara sect whose renunciates are allowed to wear clothing[18]. From the point of view of the laity, aparigraha[4] is adhered to by imposing limits on what he or she may own which means that once they have reached the ceiling on the number of goods owned, they should not exceed it as this would constitute parigraha[

Vijay Nath in her book, Dāna[11]: Gift System in Ancient India: A Socio-economic Perspective, wrote: “Ancient Hindu lawgivers were always cognizant of the spiritual merit arising from the act of dāna[11]. So much importance was attached to it as a primary social need that it came to be assigned an exalted place in the rituals of the time.

No religious ceremony was deemed complete without it; no act of religious devotion was considered fruitful unless accompanied by it. The charity was sought to be inculcated as the cardinal virtue, through which all could be atoned for and which held the key to the highest heaven.”[23]

According to Dr. Manoj Shah, Dr. Chandaria will leave behind “ a legacy  of being a Nation Builder.”

While former fellow local Billionaire Mr.Naushad Merali  through his personal assistant Jane Wokabi told  your correspondent  Dr. Chandaria is a “ great philanthropist, very committed to what he does and loves his country .”

And award-winning Jyoti Mukherjee said, “ He will always pass as an international citizen. For he’s an Indian staying in Africa, receiving awards from the Queen of England and the President of India, having businesses all around the world, and contributing towards the growth of African industries, education, government reforms, and charity. But overall, he’s an ideal human being. Such people don’t leave a legacy. They live by example for eternity.”