“ As I like saying, you have to be true to your why. Why are you doing whatever you are doing? What is the motivation behind it? For me, I was just tired of being on the sidelines of seeing plastics pollute the environment. And see where we are today. So act when you can and let the chips fall where they may,” says Nzambi Matee. 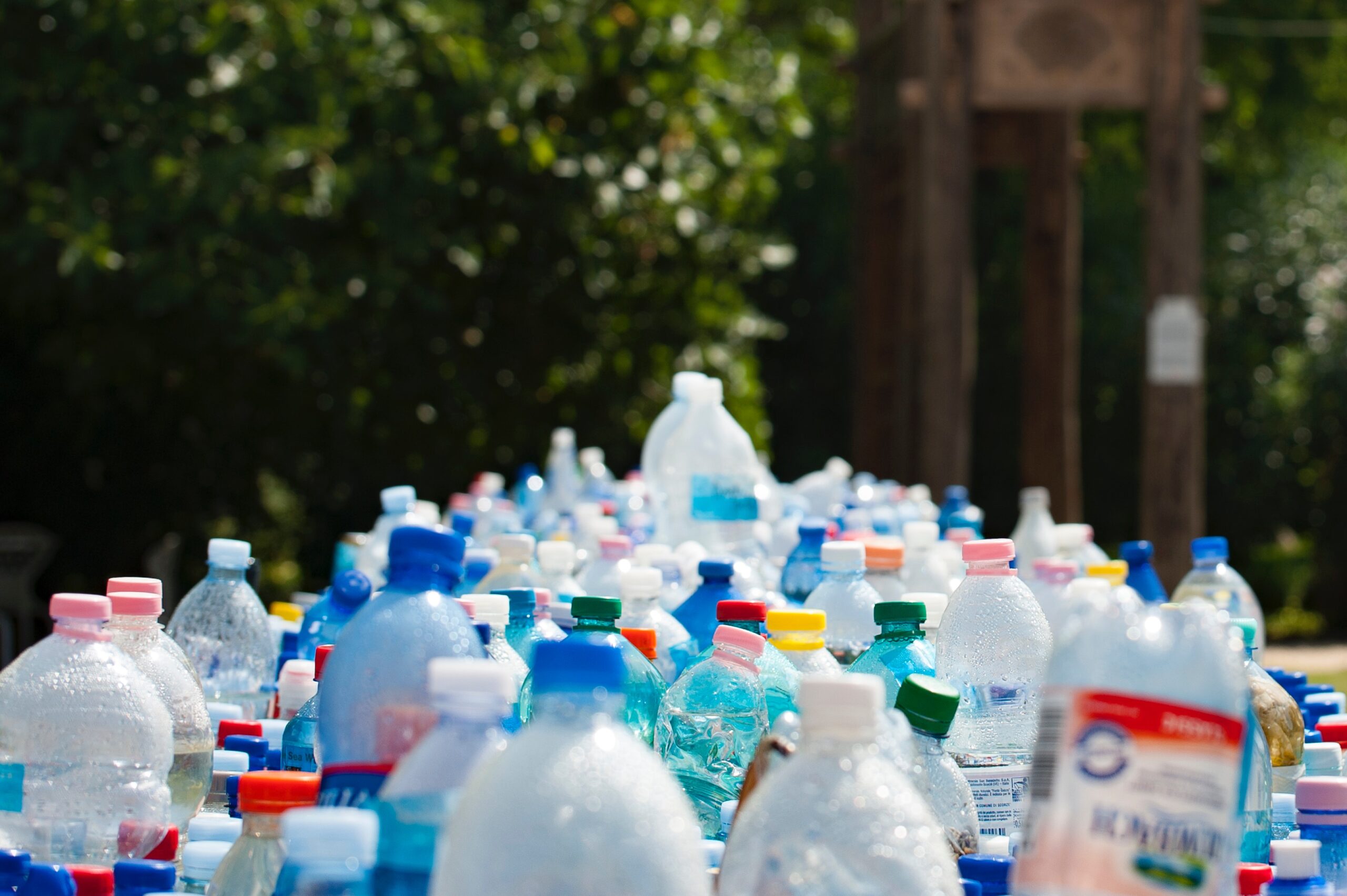 It was unmistakably her. Donning light blue overalls spotting visibly dark grease, her 5 ft 6 inches frame stood hospitable and somewhat down-to-earth in functional yellow boots. While a white beaded rosary lazily dropped on her neck, creating an indelible impression of a measured personality, if not spiritual.

And although her attendant mature girl locs gave her a tomboyish demeanor, her elocution underlined a polished elegance that betrayed a girl about town socialization.

Meet Nzambi Matee, 30, the 2020 Young Champion of the Earth winner, the UN’S highest environmental honour, given to individuals, groups and organizations that have had a transformative impact on the environment.

She’s the founder of Gjenge Makers Ltd, a Nairobi-based social enterprise that addresses the prevailing issue of waste pollution in Kenya’s capital.

This former alumna of Jomo Kenyatta University of Agriculture and Technology (JKUAT) is eponymously named after the country’s founding President who in 1978, donated two hundred hectares of farmland for the establishment of the college where she studied physics and material science, recycles and upcycles plastics to strong and beautiful construction materials, with bricks standing out.

In a nutshell, Gjenge Makers addresses the duo issues of plastic waste and the housing crisis through its plastic brick solution. And going by its “Build Alternatively, Build Affordably” model, it seeks to provide a crucial product that could empower individual communities by giving them the resources needed to rise out of poverty.

“ It’s my personal goal to help build more shelters to combat the housing crisis with our products which we make sure are accessible to essential institutions such as schools,” says Matee.

She adds that the bricks are made from a combination of plastic and sand with the pavers having a melting point higher than 350°C which makes them more durable than their concrete counterparts.

“ They have numerous advantages when compared to the conventional ones, for example, they are 30 % more durable,” says the Mukuru Slums Development Project Manager, Veto Francis, whose organization is a client.

Matee worked as a data analyst and oil-industry engineer, prior to launching her company. In 2017, she quit her job and went ahead to create a small lab in her mother’s backyard home located in the eastern parts of Nairobi, a locale that nurtures a hustling and competitive spirit among denizens, where she tested sand and plastic combinations.

There she initially began manufacturing pavers.

Her neighbours understandably griped about the noise emanating from the nascent machine she was using but resentment only emboldened her to remain on track. It took a year to develop the right ratios for her paving bricks.

Like all determined entrepreneurs while she was in the throes of beginning her new act of becoming an entrepreneur she shut down her social life and plowed her entire savings into the project.

A UNEP website explained the throes of her entrepreneurship journey by stating that “Through trial and error, she and her team learned that some plastics bind together better than others. Her project was given a boost when Matee won a scholarship to attend a social entrepreneurship-training programme in the United States of America. With her paver samples packed in her luggage, she used the material labs in the University of Colorado Boulder to further test and refine the ratios of sand to plastic.”

Her time at the U.S based university gave her time to complete two important things: Finalize the machines that make the recycled materials into pavers and also refine the plastic-to-sand ratio pro-type.

Coincidentally, her workplace is located along Nairobi’s Industrial Area, which is synonymous with Kenya’s manufacturing sector, a locale found southeast of the city’s Central Business District (CBD).

The location, verifiably, has a rich history.

Mooted in 1948 by the British administration, the 9.6 Km2 piece of land is a meticulous handiwork displaying the deliberate planning of the colonialists. In fact, on close scrutiny one is able to see derelict railway lines snaking on the newly carpeted tarmacked roads, encapsulating where the 1895 built Uganda-Kenya railway once did roaring business. 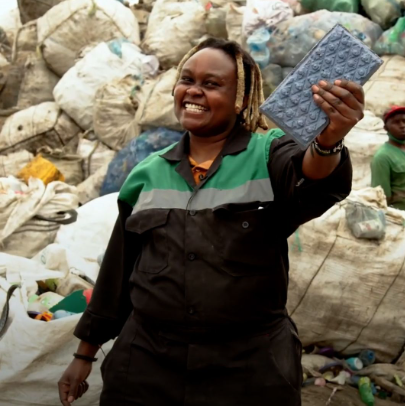 Nzambi holding the end product from the plastic menace

Inside the building that has a chock a –block feels noise from operating machines overwhelms the place that noticeably has a youthful crop of workers. From what I see I can tell the company has three machines, including an extruder that does the mixing of plastic waste with sand, at very high temperatures and a press that compresses the concoction.

“Since plastic is fibrous in nature the brick ends up having a stronger compression strength,” says Matee.“ There are about 80 of us here and you can do the math of the number of people who rely on us for employment. We also contract people to supply us with waste from packaging factories which we get for free, although we pay for the plastic that we get from other recyclers,” says Matee.

Kenya’s unemployment rate currently is 10.4 percent, according to the Kenya National Bureau of Statistics.

Martin Njoroge was jobless despite holding an undergraduate degree from the local Kenyatta University until when he met Matee who offered her a job.

“Here we work in shifts, depending on the orders placed,” says Njoroge.

With some 4 million years, of inhabitants, Kenya’s capital produces around 2,400 tonnes of solid waste daily with only 45% of the waste generated undergoing any sort of recovery or treatment process. Disproportionately most of it ends up in open dumps or is burned.

From her telling, Matee was inspired to launch her business after habitually coming face to face with the scourge of plastic bags along the streets of the tenth most populated city in Africa.

“I was seeing litter everywhere in Nairobi. It was pervasive. And while I understood that plastic waste was a global problem, I opted to do something practical and useful about the issue instead of complaining,” says Matee.

She set her mindset to singularly focus on one of the three basic needs necessary for a human being to survive including food, shelter and clothing.

“ I settled on shelter. My goal was to look at ways of converting plastic waste to assist in the provision of shelter in the housing space,” she says.

She certainly had her work cut out.

According to the Organisation for Economic Co-operation and Development (OECD), Africa has the world’s fastest urban growth rates and by 2050, its cities will be home to an additional 950 million people.

And it’s estimated that for the next 20 years, 40,000 people in Africa will be re-locating into its cities every day.

In fact, several recent studies project that by the end of this century, Africa will be the only continent experiencing population growth. With 13 of the world’s 20 biggest urban areas expected to be in Africa — up from just two today — as well more than a third of the world’s population.

And according to Habitat for Humanity, a global nonprofit housing organization, Kenya has an annual housing demand of 250,000 units with an estimated supply of 50,000 units, culminating in a housing deficit of 2 million units, or 80% deficit.

“ Housing affordability is a key challenge in Kenya with many people unable to afford to buy or build their own home. Only 2% of the formally constructed houses target lower-income families. About 6.4 million people, of Kenya’s urban population, live in informal settlements. Many families are at high risk of diseases such as malaria, respiratory infections, and or parasitic jiggers infestation,” says Habitat.

To date, Gjenge Makers has recycled more than 20 tons of plastic and officially created 112 job opportunities in the community.

“It is odd that we still have issues providing decent shelter which is a basic human need, yet plastic is a material that is misused and misunderstood for it has enormous potential,” says Matee.

“We started Gjenge Makers in 2016, with the goal of reducing waste pollution in our community. We began by organizing cleanups in our community where we would sort the plastic and then resale it to recycling companies. This mode however was not creating the impact we anticipated because the rate of waste pollution was extraordinary and exceeded what companies were buying,” says Matee.

“After a series of research, we bumped into something fresh that involved creating concrete using polymer. We broke down the waste plastic (HDPE & PET) at high temperature and pressure points, combined the aggregates with sand, leading us to produce our prototype and first minimum viable product (MVP) in 2017,” says Matee.

Right now, the company generates between 1,000 and 1,500 bricks per day, and Matee hopes to expand across Africa.

“As I like saying, you have to be true to your why. Why are you doing whatever you are doing? What is the motivation behind it? For me, I was just tired of being on the sidelines of seeing plastics pollute the environment. And see where we are today. So act when you can and let the chips fall where they may,” says Matee.